Paul and Clara Anderson started Anderson’s Maple Syrup in 1928. They began by making syrup as a hobby, to put something sweet on the family’s breakfast table. When their son Norman was old enough, he began helping make syrup. They grew the business and now, three generations later, Paul and Clara’s grandson, Norman and Janice’s son, Steve Anderson and his wife Alison carry on the family tradition.

In the mid-1930s, Anderson’s began selling the entire year’s supply of syrup to Hoves Grocery Store, which would later become Lunds, now part of the Lunds & Byerlys chain. Paul eventually added other routes through parts of Wisconsin and into Northern Minnesota. The syrup distribution business grew and in the late 40s, the family decided there was greater opportunity to be had in the maple syrup business than in farming. They took a giant step, sold the cows and jumped headfirst into the maple syrup business. They knew this was a huge risk, but they worked hard and built the business that thrives today.

Steve and Alison have grown the business under the watchful eye of Norman and Janice.  Anderson’s Maple Syrup products can now be found in thousands of retail locations across the country.  Anderson’s products are widely used as an ingredient in numerous products, from baked goods and meats to beer and mixed drinks.

Anderson’s Maple Syrup is still a small, family-run business. With Steve and Alison heading up operations and sales, and Steve’s sister Christine in charge of food safety, Anderson family members are involved in every aspect of the business. Steve and Alison’s children Ben and Mya actively help as support staff. The packaging and delivery of Anderson’s Maple Syrup is handled by a small, invaluable group of dedicated employees who have become part of the Anderson family. Even now in their 90’s Norman and Janice Anderson continue to play an important role as mentors.

Anderson’s Maple Syrup is committed to providing the best Pure Maple Syrup that is made in America.  Our family business continues to blossom and grow into a company that is women owned and focused on environmental sustainability. We are thankful for the nearly 100 years of continued loyalty of our family, friends, retailers, and most of all the consumers. Consumers have accepted Anderson’s as an everyday household item and for that we are humbled and grateful. Please call or email anytime to ask questions. 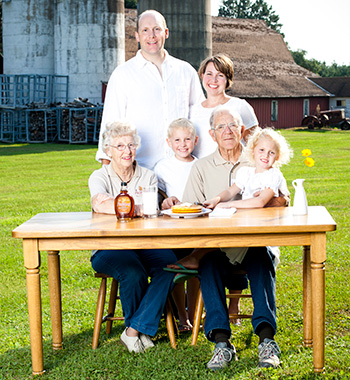 History reveals several explanations for the discovery of maple syrup. A widely accepted story of how the everyday activity of boiling water to prepare a meal turned into an important agricultural discovery. The story says a Native American woman placed her cooking pot under a maple tree before bed one evening, where she could easily find it the next morning when she would take it to the spring to gather water for cooking. When her partner came home from a long, unsuccessful day of hunting, in frustration he plunged his hatchet into the pulp of the maple tree above where the woman set the pot.

The next morning, the hunter woke early to resume his search for meat. When the woman woke, she noticed the cooking pot under the tree was already full of water. Assuming her partner filled the pot, she was silently thankful and began warming the water over the fire, hopeful that her hunter would bring home some meat to cook.

What she thought was water was actually sap from the maple tree. As the liquid boiled and steam rolled off of the pot, the woman discovered the liquid had darkened and the flavor sweetened. She had made the first pot of pure maple syrup. 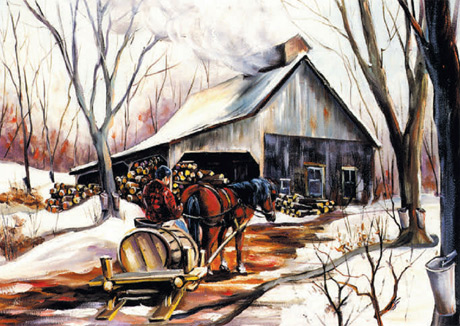 Native Americans regarded the sap of the maple tree as a direct gift from the Great Spirit. They welcomed the sugaring season each year with a great thanksgiving celebration. Maple syrup, and the directions to make it, were among the first gifts given to white settlers, who embraced the process of tapping the trees and making maple syrup. Maple syrup was an important part of surviving the long, cold northern winters for the Native Americans and settlers alike.

Maple forests are only found in the northeast quarter of the North American continent. The trees thrive only in a specific region from New England to Minnesota and the Canadian provinces that border on those states. Some small maple forests may also be found as far south as Kentucky and Virginia. As a result, other regions know very little about the difference between pure maple syrup and imitation maple syrup that is found side by side in grocery stores. Always look at the ingredients. If there are none listed, or if only pure maple syrup is listed, then you have the best sweetener nature has given us. If there are ingredients listed other than pure maple syrup, put it back! It is not the pure maple syrup that is so great on your pancakes!

Color is an important factor in grading and classifying maple syrup. The lightest grade is called Golden Color with Delicate Taste. This syrup is very pale in color with a mild maple flavor. Amber Color with a Rich Flavor is a little darker in color than the Golden, but still has a mild flavor. Dark Color with a Robust Flavor. It is, of course, a little darker yet, but is not so dark that you cannot see through it. This last grade has been known by several names like commercial, industrial, and grade B it is now called Very Dark with Strong Flavor. Dark and Amber are the two most popular grades. They are flavorful, but not over-powering like the very dark grade or mild like the Amber. We feel the very dark grade is great for cooking, baking, and flavoring and although many feel it is too strong a flavor for pancakes or waffles some people prefer it.

Thank you for visiting our website and if you have any questions please call or email.

The darker the syrup, the stronger its flavor.