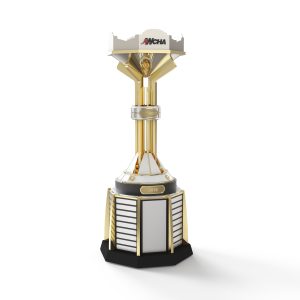 The trophy, designed by renowned manufacturer Jostens, stands more than two feet high on its own (more than three feet high upon its perpetual base) and weighs approximately 46 pounds. The hockey stick uprights are solid brass, plated in 24-karat gold, while the rest of the trophy is produced with a mix of metals and aluminum accents around a polished steel bowl. In the center is a bronze-cast medallion plated in gold with the name “Jeff Sauer” to symbolize the trophy’s namesake. The octagon-shaped base is made of the same materials and features nickel silver plates for etching the history of past winning teams.

“For 90 years, Anderson’s Pure Maple Syrup has been all about Family, Tradition, and Quality. With that in mind, we are excited to announce our partnership with the WCHA family as the Presenting Sponsor of the new Jeff Sauer WCHA Championship Trophy, and continuing support of the tradition of excellence in the Western Collegiate Hockey Association!”